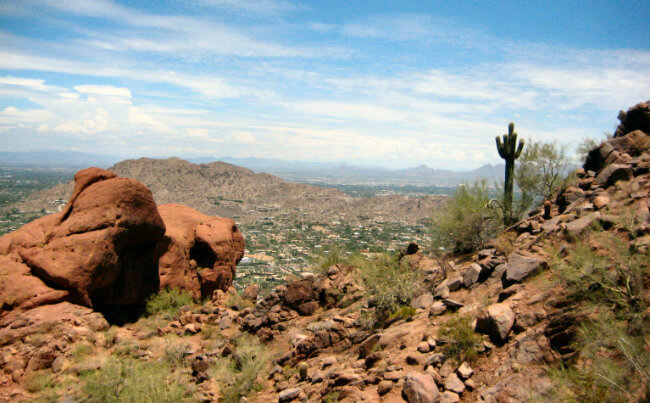 How Long Does it Take to Hike Camelback Mountain?

History of the Camelback Mountain

The discovery of a cave on the northern side of the Camelback Mountain suggests that this cave could have been used as sacred place by the pre historic Hohokam tribe, before abandoning the place back in 14th Century.

The President of the United States back in the year 1879, Rutherford B. Hayes, included this mountain as a part of a reservation for the tribes Salt River Pima and Maricopa Indian American tribes. This was a part of a total of one million acre of reservation.

To protect Camelback Mountain as a natural preserve efforts began all the way back in 1910s but by the year 1960s, most of the mountain was sold to private firms. Efforts were made by federal and state authorities to stop development activities above the one thousand and six hundred feet level. Sadly, their efforts failed but finally in the year 1965, efforts by Senator Barry Goldwater finally managed to stop development activities on the higher elevations of the mountain. The area came under the Phoenix city park in the year 1968. A major east-West Street in the city of Phoenix, Camelback Road, is named after this peak. This peak has also been designated as a Phoenix Point of Pride.

There are 3 climbing trails to climb this mountain. Two hiking trails ascend to the peak of the Camelback Mountain at elevation of 1280 feet. There is a red sandstone rock formation named Praying Monk and is used for rock climbing. This formation is located towards the northern slope of the mountain. It resembles the shadow of a man kneeling down to pray. It is approximately a hundred feet tall and the eastern front has several anchor bolts for the purpose of attaching a belay rope.

The trail leading to Bobbie’s rock begins at exactly the same location where the summit trail begins and is accessible from the Echo Canyon Recreational Area. When at the bottom of the steps, right after the drinking water fountain, you need to take a right and follow the other granite rock steps which are at the base of the large rock outcropping. This trail ends at Bobbie’s Rock which is a very popular rock climbing area. Bobbie’s Rock is visible from the parking lot directly towards the south and a bit to the west. The parking for this trail is however very limited and there can be long delays. Dogs are also prohibited on all of the Echo Canyon Area Trails except for the Cholla Trail.

The Echo Canyon Summit Trail begins adjacent to the restroom near the Recreational Area. In order to eliminate dangerously eroded areas, the lower section of this trail towards the first saddle was repaired and also rerouted. The new route does not use artificial steps which can lead to erosion. After crossing the first saddle, there are a pair of handrails which is to be used while getting up some of the rock sections. The remaining trail has mostly boulder filled, steep portions and a few sign posts guides the way towards the summit of the Camelback Mountain.

Parking for this Trail can sometimes be very hard to find despite an expansion some time back. This is especially true during the seasons and peak times. This route has a rapid ascent in a fairly short distance. Carrying water bottles advised along with sun protection gear as the sun can sometimes be very harsh and ailments are quite common. There are also few other minor threats along the way, but nothing extreme that can put your health in jeopardy.

My name is Michael, and I'm here to share my adventures, and my opinions with you. Don't spend a bunch of time and money finding the perfect hiking gear. I can do that for you!