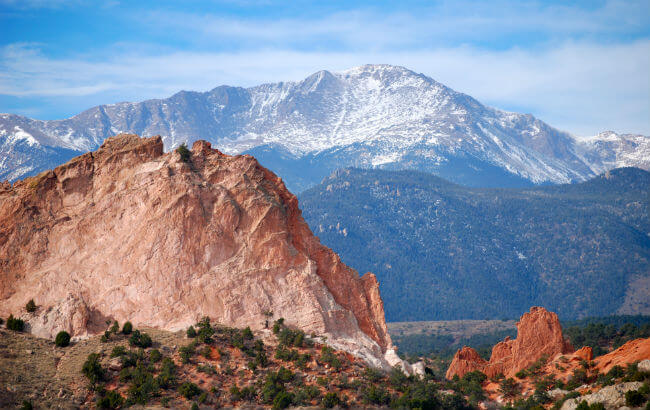 What is the Elevation of Pikes Peak?

Pike Peak in Colorado is known as the highest summit of the South and front range belonging to the Rocky Mountains. Standing 4,302.31 meters tall, this mountain is a part of the "fourteener" and is situated in the Pike National Forest. The mountain has been named in honor of the famous American explorer, Zebulon Pike, who barely failed to reach the summit but inspired generations of people to follow his footsteps. The summit is higher than any other point in the US, east of its longitude.

The first people to discover this peek where the Spanish in the 18th century. The first American sighting is credited to Zebulon Pike, who led his team on an expedition to climb the mountain but failed in their attempt in the year 1806. The first time this mountain was conquered, was by a European American, who climb the peak 14 years after the Zebulon's failed attempt. Edwin James was his name, and he had just graduated from Middlebury College, signed on to take the place of the first botanist who had died. The expedition covered the South Plate River and went up as far as Denver, as we know in the present day.

The entrance to the Pikes Peak Highway is located at a convenient distance of 15 minutes west of Colorado Springs, on Highway 24. The greatest joy of being close to the city is that you can actually spend time being amidst the grand mountains instead of spending a lot of time traveling there. A round-trip journey to the summit takes no longer than 2 to 3 hours at max. The scenic and non-crowded highway give you the opportunity to gaze at the marvelous Pikes Peak at your leisure.

At an elevation of about 7,400 feet, you'll be able to experience one of the most breathtaking views that you'll find anywhere in the world. As you twist and turn your way through a diverse range of natural settings, you come across a diverse range of scenic beauty, mountain resort course, overtaking the clouds and going up all the way to an elevation of 14,115-foot summit of the Pikes Peak, also known as the most famous mountain in America.

Souvenir Shops and Other Amenities

Along the way to the summit, you'll find the highly popular North Slope Recreation Area, Historic Glen Cove Inn, Crystal Reservoir Gift Shop, and the Summit House. There are also other attractions like fishing lakes, hiking trails, areas for picnic, and points that provide breathtaking view of the surrounding areas. You can also hire a guide from one of the local agencies and learn about the facts, myths, history, and flora and fauna of the mountain. There are necessities and other services available that would make your trip no less than memorable.

There are multiple visitor centers located in the peak along with some other restaurants and gift shops. These centers are located in three places, being 6 miles and 12 miles away from the summit. There are many ways to which one can ascend the mountain; the Pikes Peak Railway is a popular way tourists reach the top. It operates from Manitou Springs to the summit all year round, given the conditions are suitable to permit traveling via the road. This cog railroad was only paved in the first half way point, was first made famous by the film Climb Dance. The road is cared after by the city of Colorado Springs as it operates as a toll road.

At the summit, the partial pressure of oxygen is only about 60% of the average level, which would be at sea level. This will naturally make you breathe faster if you are not used to living at high altitudes. Those who are familiar with high altitude training are aware of the fact that prolonged exposure to reduce pressure levels will produce more red blood cells to offset the lack of availability of oxygen.

Altitude sickness may develop within those who overexert themselves or are sensitive. Conditions at the top of the peak are typical of the neighboring areas as there is always the chance of snowfall all year round while thunderstorms are the most common in the summer season.

My name is Michael, and I'm here to share my adventures, and my opinions with you. Don't spend a bunch of time and money finding the perfect hiking gear. I can do that for you!